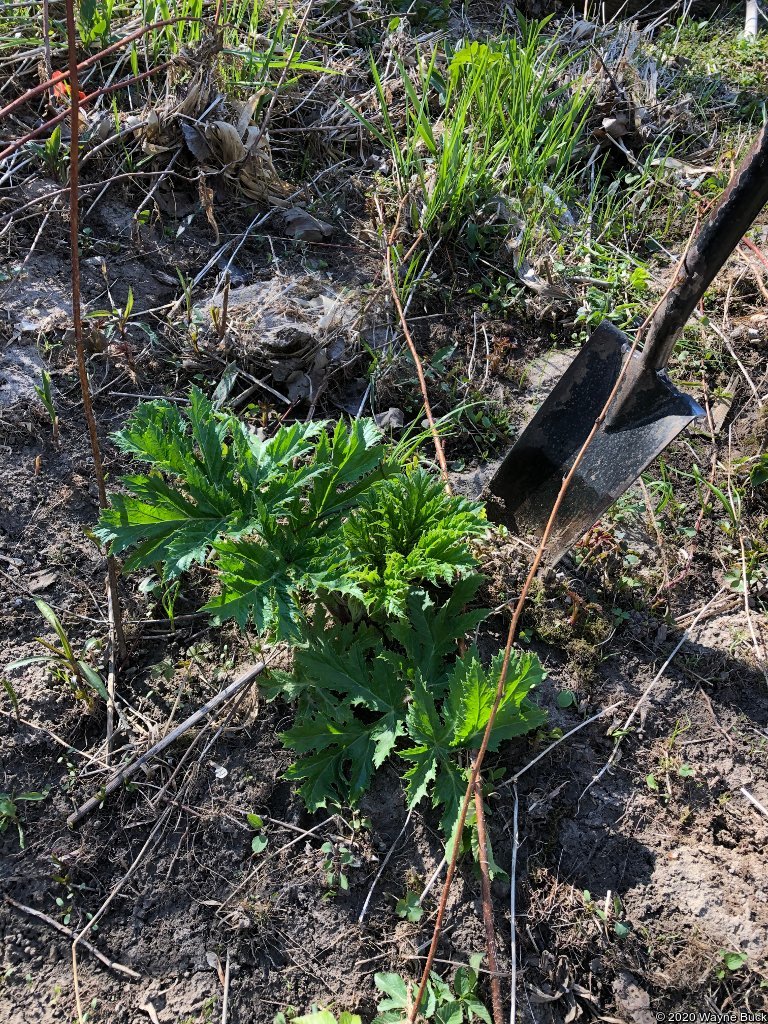 Originally posted May 5, 2020. Reposted June 30, 2020 with more reports and photos from the rest of the monitoring season.

The members of the Montgomery Committee thought you might be interested in the one activity that our committee can continue while in Corona Lockdown, and that is the monitoring of The Montgomery Wildlife Sanctuary for Giant Hogweed (GH). We did not carry out our normal spring clean-up this year as that requires the cooperation of the entire committee carrying out tasks in groups, so no tarps’ placements to restrain the periwinkle, no trail clearing (except Wendy Shaw & her husband who did go down and work one lovely day in April). However we did, and can, safely do the Giant Hogweed monitoring. Our monitors report, after each weekly outing, on their observations & activity related to GH, and often that includes general observations of plants, birds and animals seen or heard. This way you will hear about nature’s response to this unusual spring in 2020.

Friday, April 17, 2020 – Today we had the first of this year’s Giant Hogweed inspections and what a day we had. First, the weather was superb. No insects! Second, Graham and Margaret Macdonald accompanied us on our inspection. Lynda and Margaret walked the trail, checking the signposts and picking up what little trash there was.  Graham and I walked the riverbank.
We found 6 GH plants, of the size shown in the photo. They have just started growing so are easy to dig with most of the tap root attached. It was not deemed necessary to remove the plants so they were chopped up and left to desiccate in place.
There were a large number of trees lying down in the sanctuary; probably due in part to the torrent of water that swept through the area earlier this year. There were many trees to climb over along the river while looking for GH. The path appeared to be well trodden, causing us to wonder if more people are using the area as a place to walk during the covid-19 lockdown.
We saw a number of species of plants including:
(* denotes blooming )
Bloodroot*
Red and white trillium*
Yellow and White Trout Lily*
Spring Beauty*
Twinleaf
Great Angelica
Blue Cohosh
Mayapple
Birds:
Great Blue Heron
Belted Kingfisher
Red-Tailed Hawk (very far away)
Red-bellied Woodpecker
Downy Woodpecker
American Robin
Wayne Buck

On Monday, 4 May 2020, Graham and Marg Macdonald accompanied by Wayne and Lynda Buck, entered the property for the season’s second inspection for Giant Hogweed. The ladies were tasked with walking the trail clockwise to install aluminum trail markers. The normal direction is counterclockwise which follows the progression of numbered posts. Weather – Mix of sun and cloud, 5C, very windy from NW.

Since the previous week, despite warm weather, there was very little additional growth, The extraordinary lack of any leaf litter on the ground was again noted, as were the great number of downed trees and associated huge piles of vegetative debris, up to 4 feet above the ground. This was all due to the very severe flood waters March 10 and 11, 2020, that scoured the property.

Graham and Wayne walked the river bank and the adjacent forest interior (up to 25 paces in from the “Fisherman’s path”. Three small GH plants were found and dug up. One was in the interior, one was next to the path, and the third close to the river. All were on the segment of the property still owned by the farm across the river to the west.

There is evidence of much foot traffic on the paths, and several new paths have appeared to circumvent the debris piles. Two dog walkers and one family with young child were seen. The increased traffic is probably due to the Covid-19 lockdown.

Only birds seen were Robins, Chickadees, and a Thrush – perhaps a Gray-cheeked, but view was very brief with binocs. Red Bellied WP heard (Lynda & Marg)

Wednesday, May 20, 2020 – Just finished at Montgomery. Ten plants dug up, root and all. The ground quite soft after all the rain so digging was easy.

Lots of birds, but as I spent most of my time looking down I did not identify that many. Did ID Blackburnian and Black-throated Green warblers, Rose-breasted Grosbeaks and Northern Orioles. Numerous woodpeckers also heard and seen.

A few bugs but no mosquitoes yet. 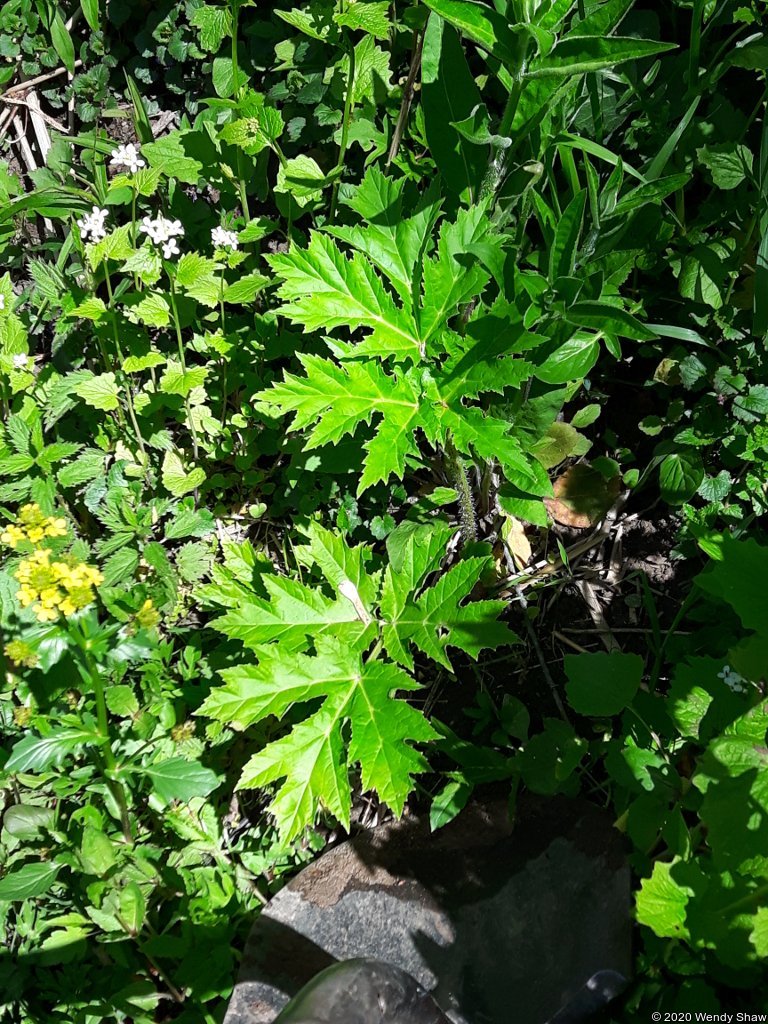 May 29, 2020 – After a week full of heat warnings, I finally made it out to Montgomery on a pleasant Friday morning. Mosquitoes have definitely arrived, but they were only slightly bothersome.

I ended up spotting and digging up 4 Giant Hogweed plants around 2 feet tall. After all the time I spent scrambling around in the underbrush by the river, 3 of the 4 were mockingly sitting right beside the path. The fourth was on the riverbank straight out from the first wood duck box. While trying to find this plant again after fetching my shovel, I accidentally flushed a fawn. Mommy was nowhere in sight.

There were many Wild geraniums in bloom, along with Mayapple, Star-flowered Solomon’s Seal, and aliens like buttercup and Tatarian Honeysuckle.

The ponds had lots of frogs and there were all sizes of toads throughout the forest.

I visited Montgomery with all my Giant Hogweed required equipment – a pail containing a squirt bottle of soapy water, face shield, rubber gloves, long-sleeved rain coat and towel along with a long handled shovel. After applying insect repellent and forcing myself to leave the binoculars in the car I headed into Montgomery in search of GH. It was a beautiful calm morning and birds were singing everywhere.

Everything has grown rapidly so while walking off trail in search of Giant Hogweed it is very difficult seeing what is in front of your next step. The shovel acts as a great walking stick.

Some Jack-in-the-Pulpits were at least a metre high and Purple-stemmed Angelica is now as tall as my shovel is long.

I found 3 Giant Hogweed plants during my search. One was in the neighbouring property just north of our property line. Two others were further downstream, the furthest being very near our number 8 marker at the Black Maple tree. Near that point I discovered an obvious trail through a large patch of Ostrich Ferns so I followed it to the rivers edge where I found a pile of old tree branches against a fallen tree overhanging the river bank. An animal splashed at the base of this pile and disappeared. I later heard some faint noises coming from the pile of sticks. I believe we have a beaver attempting to make our shoreline its home. There, right at the river’s edge I found the third GH plant. This was the smallest of the 3 plants I found and possibly very close to where Paul found a plant last week.

All of my plants were less than 30” tall so you nearly have to step on top of them to find them. This is a good sign our searches are working because by now a well established plant would be at least as tall as the angelica plants and stand above most other nearby vegetation.

I visited both Wood Duck boxes and beneath the most easterly I discovered several Eastern Screech Owl pellets. Other birds of note that I heard or saw during my time at Montgomery were: Bald Eagle, Green Heron, Yellow-billed Cuckoo, Belted Kingfisher, Eastern Wood-Pewee, Eastern Phoebe, Great Crested Flycatcher, Baltimore Oriole and Rose-breasted Grosbeak. I also saw a few toads. On my arrival a White-tailed Deer was seen in the field just east of Montgomery.

Well it is true, it was a good to be at Montgomery. We followed the trail to post #4, applied insect repellent and I then ventured toward the river past our property marker. In total we found and removed 2 small plants. The first one about 24″ tall and not very bulky. The second was about 12″ tall and had only a single stalk. We would have missed this one except that we were admiring the ferns when it caught my eye.

After last night’s rain, the trails were slippery and had standing water in some places. Trail markers worked well. Some parts of trail well used, other parts not so much. No other persons encountered while there.

In terms of how little GH was found, and none of it on our property, I see no need to go out weekly. Perhaps another monitoring in two or three weeks.

Tuesday, 16 June, 2020 – Wendy Shaw found no Giant Hogweed plants, so it was decided to skip the following week of monitoring.

Tuesday, 30 June, 2020 – I visited on a sunny day with few mosquitoes, but during the morning it slowly turned into a sauna. I didn’t expect to find Giant Hogweed, and didn’t find any (but that wasn’t a sure thing since I found some last year at about this time).

There were a number of Ebony Jewelwings flitting about, but none of them was kind enough to pose for me. There were quite a few Michigan Lilies blooming. Other flowers in bloom were Canada Anemone, Fringed Loosestrife,  and Tall Meadowrue. Great Angelica was living up to its name, many of them now taller than me.

Along with the usual chatter from Robins, Chickadees, Redwings and Jays, there were some birds just getting on with life. A Brown Thrasher sat there quietly, and a pair of Baltimore Orioles perched in their orange and yellow finery. A male Downy Woodpecker was racking up air miles fetching food for his youngster. A juvenile House Wren was showing off, while still keeping an eye on me.

I trimmed some branches that were blocking the entrance to the trail, but there is still some trail clearing work left to be done.

Well that’s a wrap for the Giant Hogweed monitoring season for this year. Thanks go to the volunteers who helped us keep this noxious intruder under control.