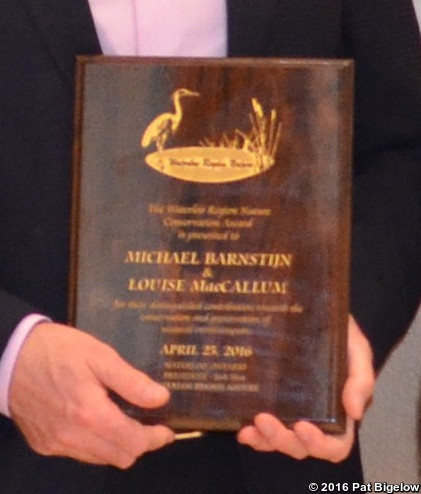 In a brief ceremony on Monday, April 25th, Waterloo Region Nature announced the 2016 recipients of the regional Conservation Award, an award that acknowledges the contribution made by an individual, group, organization or corporation toward the conservation and preservation of the natural environment of Waterloo Region.

One or more Conservation Awards may be presented in any given year.

As part of the monthly gathering of the nature club, which counts over 200 members, two individual awards and one shared award were presented. The recipients each received a plaque and generous ovations for their accomplishments as ambassadors for environmental stewardship and advocacy in Waterloo Region.

One of the recipients, Thelma Beaubien, has created and organized several “Wonders of Nature” events across the Region, which encouraged families and approximately 500 individuals to get in touch with nature, most recently in partnership with the City of Kitchener. In addition, Beaubien has volunteered for butterfly monitoring in the Huron Natural Area, and also converted her yard into a haven for pollinators, creating learning opportunities in the community that feature the importance of butterflies and pollination.

Deb Swidrovich was honored for her leadership in various initiatives dealing with issues such as:  invasive species, road development, and urban sprawl. In particular she was recognized for her involvement in the concerted effort to protect the Laurel Creek Watershed as an Environmentally Sensitive Landscape (ESL), during which she engaged local residents through open houses, presented at local councils, and liaised with local politicians to ensure informed decision making.

Michael Barnstijn and Louise MacCallum received the award for their engagement as founding members of rare Charitable Research Reserve. Their vision to establish rare as a land trust and environmental institute was paramount to ensure that over 900 acres of land could be set aside for conservation, which so far is the largest contribution that has ever been made to land preservation in Waterloo Region by private individuals, for the community to enjoy.

Josh Shea, president of the club, remarked: “We are extremely fortunate to have such strong support for conservation efforts in this Region, and on behalf of all club and community members I am most thankful for your relentless energy and championship.”

The awards are celebrated annually, with nominations being accepted from October to December each year. Previous recipients include community leaders such as Kevin Thomason, who also was instrumental in the achievement of the Laurel Creek Headwaters ESL designation in 2006.

Scroll back to top